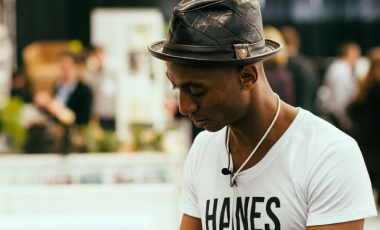 A dip in the right direction

Yohannes Petros, a former yoga instructor, understands the importance of keeping things simple. For the creator and owner of Hanes Hummus, that means making hummus using only a few basic and fresh ingredients. The result is a taste that is winning over consumers, and shelf space against the big players who dominate the market.

Once found mainly in Middle Eastern restaurants and health food stores, over the last 15 years, hummus has become a grocery store staple as shoppers fill their baskets with healthier food options.

Petros never set out to be a food entrepreneur. His journey started in 2000 in his own kitchen while he was still a student and teaching yoga in Vancouver. It was there that he crafted small batches of hummus to supplement his diet and, to their delight, share with friends. When those friends couldn’t seem to get enough of his signature hummus, he knew he might be onto something.

When Petros moved back to his hometown of Saskatoon in 2009, the idea of starting his own hummus business began to solidify. His cousin, who consistently raided Petros,s fridge in search of hummus, brought some to the restaurant where she worked. She shared it with co-workers and the restaurant’s owner, and the taste stopped them all in their tracks. The restaurant became his first customer.

Soon, Petros was selling his hummus to thousands at the city’s annual Folkfest event, and then to local health food stores in Saskatoon and Regina.

Today, Hanes Hummus is listed over 120 health food stores and markets (and counting) in western provinces, including Co-op stores throughout Saskatchewan, and Choices and Whole Foods in Vancouver. Petros employs five part-time workers to help with production out of a commercial kitchen. He delivers product himself (except for a distributor to service the Lower Mainland), and can be found almost daily in stores doing demos.

IN 2015, HE EXHIBITED AT THE CANADIAN HEALTH FOOD ASSOCIATION TRADE SHOW IN VANCOUVER. “IT WAS AT THAT SHOW,” HE SAYS, “THAT I WAS REALLY ABLE TO SEE THE POSSIBILITIES IF I WANTED TO TAKE THE CHANCE AND TRY TO GROW MY BUSINESS.” THE BEST IS HUMMUS HISTORY.

Being based in Saskatchewan provides a natural competitive advantage. The province is one of the world’s largest chickpea producers, so the majority of Hanes Hummus ingredients are local.

Although hummus has become mainstream, the biggest challenge for Petros is educating retailers, who already carry mass-produced brands of the product, on why they should sell his. “I say, ‘I know that you have hummus, but you don’t have Hanes Hummus,’ ” explains Petros on how he approaches retailers. “They’re always talking about wanting something different,” he adds, “and everything about Hanes Hummus, from the packaging to the recipes to the quality of the ingredients, is different from everything that’s out there.”

Hanes Hummus also differs in that it’s not heat-pasteurized. Although heat pasteurization, along with preservatives, extends a product’s shelf life, it diminishes many of the good nutrients found naturally in the food. That’s something Petros is not willing to forfeit.

He recognizes that it takes time to build a brand, as well as strong relationships and trust with retailers. His goal in the next five years is for Hanes Hummus to become a recognized brand available nationally and in select markets within the U.S.

“I’m building that demand slowly,” he explains, “by persistent and believing in what it is that I’m doing.” With an uncompromising commitment to quality and with a taste that’s keeping an ever-increasing legion of fans dipping for more, Hanes Hummus is proving that sometimes the little guys do win.

Hanes Hummus was officially established by Yohannes Petros in 2009 from his small home kitchen in Saskatoon, Saskatchewan. However, the story of Hanes Hummus’s beginnings go back a decade.

Want to Wholesale Hanes Hummus In Your Local Store?